A Canadian Aerial Response to Emergencies

Is There a Need?

The size and number of emergencies is not decreasing. In just the past two years Canada has experienced a barrage of catastrophes, including wildfires, heat domes, atmospheric rivers, floods, and pandemics. And all predictions point to further turmoil, with climate change intensifying all natural disasters. The world is changing – is the response? Are jurisdictions adapting fast enough to protect people, communities, and resources from threats?

Countries around the world have purpose-equipped aircraft providing military, medical, evacuation, humanitarian, and wildfire response operations. But cracks are becoming evident. There is a limited supply of these specialty aircraft. Emergency air resources are stretched, pushed to the limits by an ever-increasing number of disasters spanning all seasons, fueled by climate change. Jurisdictions that used to share resources are no longer always able, with their own fleets dedicated to ongoing crisis response. Provinces in Canada have partnered with states in the US to share aerial firefighting aircraft for decades but in recent years there have been too many fires occurring on both sides of the border for either party to always offer aid.

Specialty modern aircraft for multi-role missions are available for purchase, but the turnaround time from a contracted order to operational deployment could be months, as is the case with the Conair Dash 8-400MRE, which operates as an airtanker plus cargo/passenger/medevac, to years, as is the case for purpose-built large amphibious waterbombers.

In addition to a lack of supply, there is a large number of airtankers reaching the limits of their operational life. Aging airtankers demand more and more frequent heavy maintenance; challenging supply chain availability of parts; and rising operational budgets. Aging emergency response aircraft can face longer periods of grounded time, unavailable to respond when the call comes.

Fleets of aerial firefighters which tackle wildfire response are often converted from older frames, used civil or military aircraft. The aerial firefighting environment is significantly different than the average flight environment, meaning fatigue damage will occur at a faster rate. A fully loaded airtanker on a mission will perform a number of low-level manoeuvres in turbulent conditions, putting strain on the airframe. Metal fatigue damage will show up much sooner and airframe cracks will grow much quicker for airtankers, limiting the lifespan of an airtanker.
Conair, the largest fixed-wing, privately owned aerial firefighting company in the world, discovered, when researching a new modern airframe to replace their legacy fleet of CV580 and Electra 188 airtankers, that some OEMs (Original Equipment Manufacturers) forecasted a damage rate factor in excess of 20 cycles for every single aerial firefighting cycle flown. After considering 29 airframes for conversion to airtanker, Conair selected the De Havilland Dash 8-400, with a damage rate factor of 6.5 cycles in the airtanker role, following Transport Canada regulations, the strictest in the world for aerial firefighting operations. A safe return to base from a mission protects not only crew, it means the airtanker is operational to respond to the next emergency. 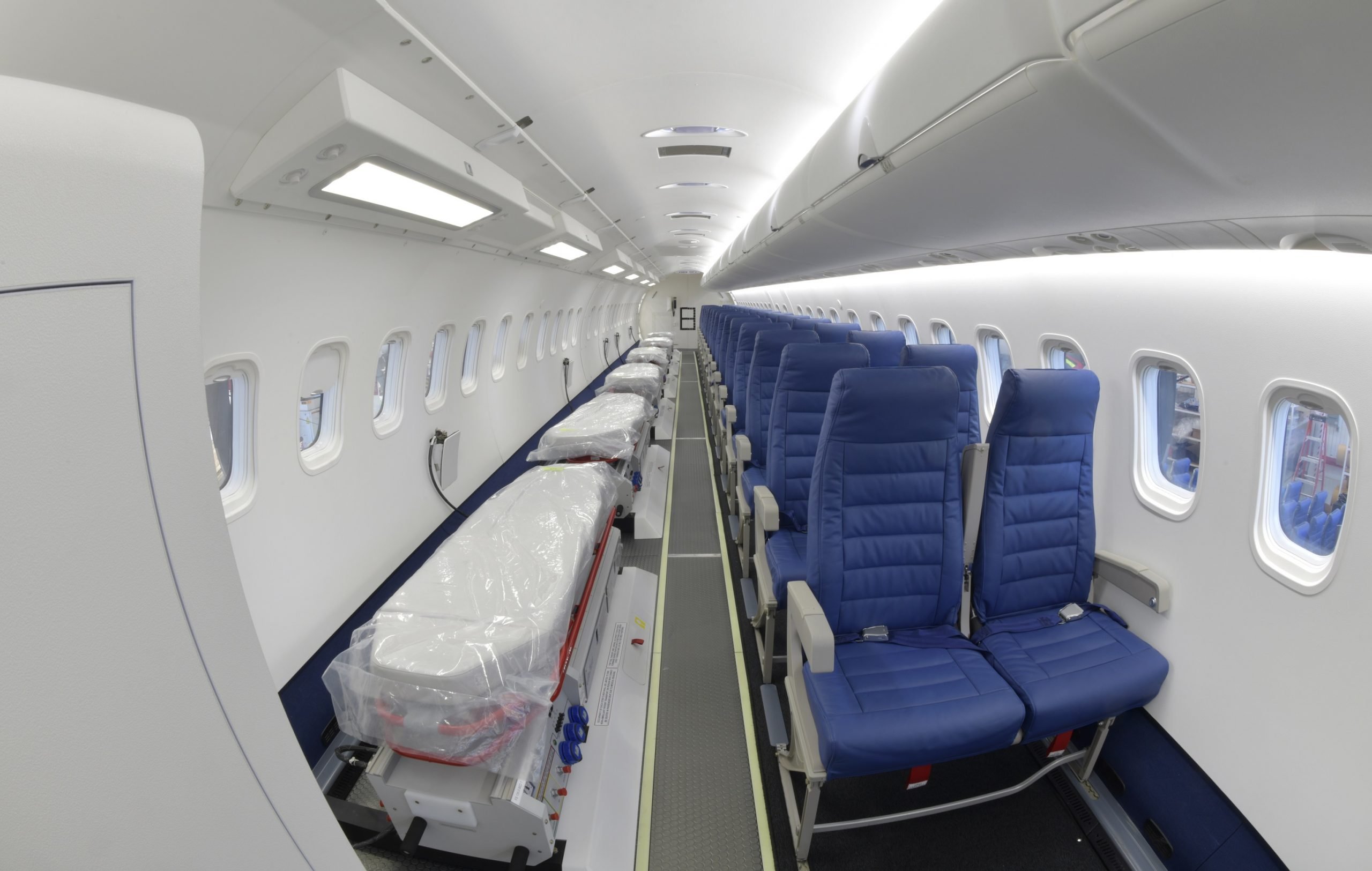 Budgets are limited. Trained crews for technical operations are limited. The type and number of emergencies are vast, located in diverse geographic regions. An emergency response aircraft that can perform more than one type of mission can be invaluable.

Sécurité Civile in France has operated the Dash 8-400MRE multi role for over 15 years, a fleet of six with two more on order, supporting both France and countries around the world with emergency response operations. The specialized multi-role aircraft can attack and fight wildfires; transport vital emergency suppliers; transport medical, military or crisis personnel; evacuate residents; medevac critically ill patients; and ship humanitarian relief supplies. The aircraft was sent to Haiti in 2020 for medical evacuations following the earthquake that affected more than 300,000 people; it responded to Conakry in Guinea, transporting equipment to Ebola virus treatment centers; and most recently, the emergency response aircraft flew humanitarian cargo and critical medical supplies to Poland from France, in support of Ukraine.

While urban, populated centers enjoy easy access to supplies and services, those residing in remote communities have limited means of transportation. When faced with disaster, these vulnerable communities need fair and equal access to services. The Dash 8-400MRE reaches isolated communities, landing on paved, gravel or ice runways, shorter than required for larger aircraft, operating year-round in diverse geography.

Is it Time to Share Air Assets for Emergency Response?

A cost-sharing approach has been accomplished successfully in aerial firefighting in Canada for decades. Provinces across Canada share airtanker resources, strategically utilizing mobile retardant tanker bases to cover nearly 1 million sq kilometers for a rapid response. The US and Canada also share resources, with airtankers responding when needed across borders.

Is it Time for CARE?

CARE is the Canadian Aerial Response to Emergencies, a fleet of aircraft dedicated to supporting citizens through crisis. The aircraft is Conair’s Dash 8-400MRE, a multi role airtanker to fight wildfires and transport critical personnel, supplies and medical aid to countries in need. It is available now.